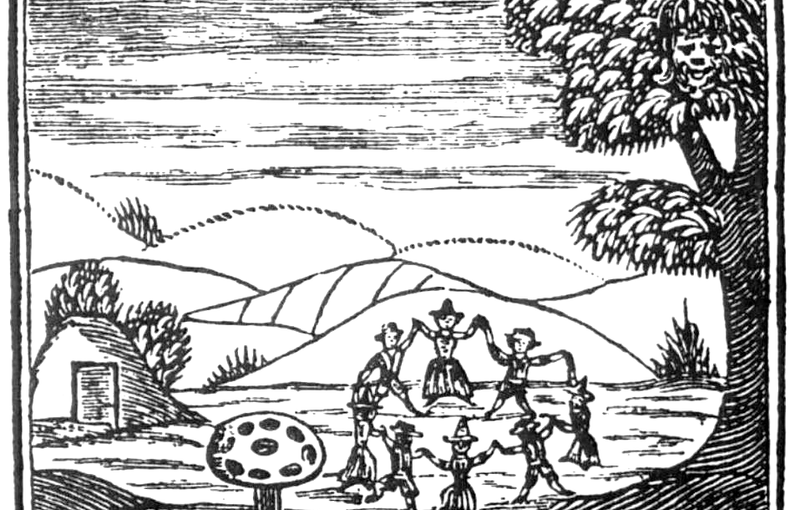 This episode features the sort of experience that we might visualise from 19th century collections of Irish folklore. The encounter took place in Ireland, but was experienced just a few years ago, by a young Australian man as he toured around in his camper van. It’s a pretty epic story and he feels very lucky to have experienced this first hand. A whole host of apparitions popped up and each brought their own vibe to the events which unfolded.

Some listeners may find parts of the content in this episode frightening.

Fairy folklore is full of the little folk dancing in circles. In most cases, humans are tempted to enter the circle or the dance and are lost forever. Sometimes the abductee can re-appear hours or even years later, though they’d swear they’d only been away for a few minutes. They may be bestowed with unusual powers or destined to sicken and die early.

There’s a brilliant article on the subject of, ‘The Fairie Dance’ by Dr Neil Rushton at Dead But Dreaming.

And here’s an excerpt from Dr Simon Young’s Fairy Census 2014-2017 which describes a similar encounter in Ireland:

§151A) Ireland (Co. Limerick). Female, 1940s; 11-20
‘When my mother was a young girl, her father sent her to fetch a bucket of water many fields away from where they lived. On the way back with the water, she stopped at the top of a low lying hill to rest. Looking back down over the fields, she saw a large group of ‘people’ all dancing around in a circle in one of the many local ‘faery forts’. (faery circles) She described their collective dress as comprising of similar colours: red, green and blue. The people were also wearing hats or caps. My mother knew that the area in which she lived at the time of the sighting was sparsely populated, with only a few neighbours close by and those who lived there were not rich or rich enough to have that many people partaking in that type of merriment. Even if they were, it was very early in the day to be doing so and the faery fort was several fields away from the nearest road. It dawned on her that these people were no ordinary people and could sense that she was not supposed to be looking at this ‘dance’. She took off running, back to her father’s house, spilling most of the water on the way and in doing so, upon her return, got a ‘good telling off’! She relayed this story to me many years ago only after listening to a local radio station documentary on Irish folklore and legends. A caller phoned in and told a story, which was very similar to hers: a group of people, dancing around in a circle in a faery fort, wearing similarly coloured clothes. This caller’s story would have taken place in the same decade that my mother had hers. My mother kept this story to herself for many decades! I suppose from a combination of ridicule, growing up in Catholic Ireland and the fact that one was to be careful when speaking about ‘the Little People’! The particular faery fort in question still exists and is located behind ***, ***, Limerick. Though now, it is completely overgrown with trees and undergrowth. It is now mainly used by some of the local people who throw their grass cuttings in over the ditch.’

There are differing ideas about what orbs are exactly but from my own experience, I believe they are condensed manifestations of energy, be it spirit, thoughts, fae or otherwise. They appear as translucent globes or circles of light. They can be different colours but they’re often white and some people report that they’ve changed in size as they’ve been viewing them.

Here is another great excerpt from The Fairy Census 2014-2017, which describes an encounter with orbs:

§242) US (Carolina). Female; 1990s; 11-20; in woodland.
‘My friend invited me to go out into the woods to look for fairy rings. We took wine from her parents’ pantry as a friendship offering. We left at sunset, having been given permission to go camping. We walked a little way out into the woods, maybe fifty yards, stopping in a clearing among cedar trees. We each took a small sip of wine, toasting the good health of any spirits who happened to be about, left some in a sea shell which we had brought for that purpose, and poured the rest out on the ground. We then lit a small fire from deadwood since it was getting cold. When we got tired, we poured water on the embers and stirred them to make sure it was all out. We then wrapped ourselves in blankets and lay down to wait. What felt like hours past, and then, when the night was very dark, and my friend was talking about the dark spirits I had seen previously in another forest, there was suddenly a wild presence, a sense of something entirely outside the normal, safe, civilized world. And where we had left the wine we saw small, colorful lights hovering in a circle about a foot or two above the ground. They went round for a while as we stared in mute amazement (I don’t think either of us expected anything to actually show up) and then just as abruptly they vanished. We decided it might not be best to spend the whole night there and rushed back to her house, or at least tried to rush since the path which had been clear on the way seemed to lead us in circles and we were forced to cut through deep underbrush before reaching her back door all out of breath. My friend’s mother was at the back door and said she had been calling for us for the last hour, thinking it was too cold to stay out, but we never heard her.’