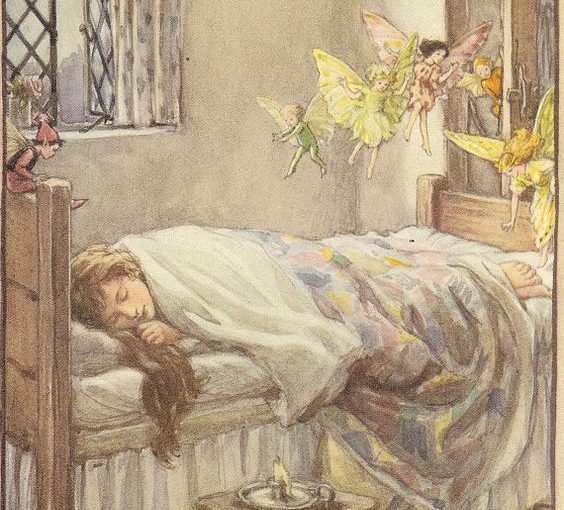 This episode is a truly spectacular personal experience.  A young child has a visitation from a host of fairies, which begins a whole series of events. Many of us have memories of extraordinary encounters as young children and hearing these particular experiences resonated very deeply with me, as it will for many listeners.

The repeated visitations and later UFO event suggest the house was on a ‘fairy path’. See notes below.

This forms the first of a two part conversation and a further experience is discussed in the next episode.

We’ll be exploring this theme of childhood experiences further as the year goes on.

It is possible that the house was built on a fairy path – or the fairies’ pass. These are routes of strong energy used by the fairies as they go about their business. There are many different cultural practices which understand and work with lines of energy within buildings and landscapes eg. Chinese geomancy and Feng Shui. The concept of ley lines, as named by early 20th century archaeologist Alfred Watkins are now well known as lines which cross the globe, like rivers of energy intersecting with sacred monuments.

As Paul Devereux describes in his book, Spirit Roads: An Exploration of Otherworldly Routes, fairies also had their own routes through the landscape which you’d be well advised to steer clear of. Even in the early 20th century in Ireland, people were still very careful about to fairy paths wherever homes or extensions were built. Obstructing these paths could result in bad luck or illness for the family and sometimes even poltergeist energy in the home.

There were various methods of putting this right as advised by local wise women, such as filling up two side doors and opening alternatives or ensuring that windows remained open at night, to permit the onward journey of the fairies. To avoid antagonising fairies in the first place, tradition held that you should place stones or sticks at the four corners of the intended building spot overnight and see if they remained there in the morning. If they had been clouted over by protesting fairies then you’d be wise to pick another spot.

Simon Young’s Fairy Census (2014-2017) is an excellent resource for anybody interested in contemporary fairy encounters.

The following two accounts were mentioned in the podcast episode as bearing similarities to our guest’s experience. Both feature ongoing night visitations. The first involves a conversation with a ‘leader of the group’ and the second describes flying over rooftops, being in control of the flying and the sense of ‘exchange that occurred’.

§167) Scotland (Glasgow). Male; 1950s; 0-10; ‘I was about seven years old (1953). I had been sharing a bedroom with my elder brother, who was about eighteen at the time, but he left to join the army. So, I was left on my own in the room. I went to sleep as normal, but woke after a time to find a group of the little people dancing around on the floor at the head of my bed. I know I had a conversation with what appeared to be the leader of the group, but at this distance of time, I couldn’t say what it was about. This went on for some months on a more or less nightly basis, but gradually the interval between appearances became longer and longer until it stopped altogether.’

§338) US (New York State). Female; 1960s; 0-10; ‘Not sure when it began as a child but I know it ended on my tenth birthday because I recall the disappointment and correlate that year. They came to me in my sleep, very often and the purpose was always the same. To take me to fly above the rooftops and tree tops throughout my neighborhood as a very exciting treat. I thought for years it was just an odd recurring dream but the details of the things I saw from that bird’s eye view would be impossible to have been a dream. In latter years I was able to understand and recall more emotional details. I don’t recall the first or last time they came but I know no actual words were spoken. They were fluid like beings that were dressed in material that barely covered and was white and thin  and always flowing as they too never touched the ground although [they] had legs and feet. I went willingly and trusting as I knew it was under my control where I was to fly and when I was to return. I now feel there was an exchange that occurred. I feel they (as many as five or six) absorbed the excitement from me. Never draining although I slept deeper and always briefly awoke at the point of being back in my bed. They oddly had no identifiable age but male/female was apparent and not concealed.’

In 1951, Dr Purcell, a lecturer from Cambridge, wrote to Marjorie Johnson of the Fairy Investigation Society. He describes seeing trooping fairy soldiers cross his bedcovers some fifty years before, as a five year old child :

In the year 1900-1901, during the /south African War, when I was about five years of age, I lived in Gillingham, Kent. Every night for some months, after my mother had kissed me goodnight and shut my bedroom door, there was a short interval, and then I would begin to hear distant, massed Lilliputian bands playing. The music grew louder and louder as it came nearer and nearer. There was a night light burning on the mantelpiece, and by the light of this I saw column after column of tiny soldiers marching up from the right of my bed over my eiderdown (I remember its pattern and colour clearly) and across to the other side where they disappeared over the bedside. Each soldier was about nine inches high and wore a red coat. There was battalion after battalion of them, and each was headed by a brass band. As these passed, they played minute martial music, far more exciting than any music I had ever heard in the daytime. The march-past lasted for a few minutes, and then I fell asleep. The direction was always from right to left. I never tried to touch the soldiers, but they were completely real. I actually did see them, and I should be prepared to state this on oath, if necessary, in any Court of Law’

This last account from 1656 describes a host of fairies arriving into a bedroom late at night. It’s reported in a letter by John Lewis of Cardiganshire, Wales who was an acquaintance of the man experiencing the encounter.

A man and his family being all in bed, about after midnight, awake in bed, he could perceive a light entring a little room, where he lay, and one after another of some a dozen in the shape of men, and two or three women, with small children in their arms, entring in, and they seemed to dance, and the room to be far lighter and wider than formerly: they did seem to eat bread and cheese all about a kind of a tick upon the ground; they offered him meat, and would smile upon him: he could perceive no voice, but he once calling to God to bless him, he could perceive the whisper of a voice in Welch, bidding him hold his peace, being about four hours thus, he did what he could to wake his wife and could not: they went out into another room and after some dancing departed, and then he arose; yet being but a very small room he could not find the door, nor the way into bed, until crying out, his wife and family awaked. Being within about two miles of me, I sent for the man, who is an honest poor husbandman, and of good report: and I made him believe I would put him to his oath for the truth of this relation, who was very ready to take it.

2 thoughts on “Episode 31: Arrival of the Fairy Host”