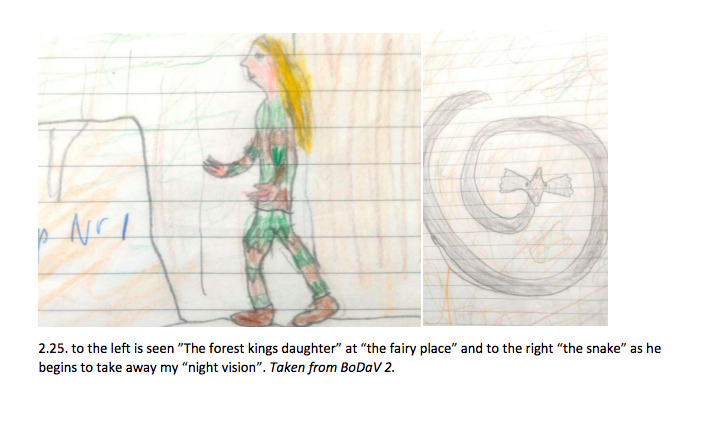 This episode includes excerpts from The B.O.D.A.V.’s (The Books of Dreams and Visions). It’s a personal collection of fairy encounters and vivid dreams, experienced by a young man from the age of 11 to his late teens, provoked by night time forest walks with his father.

Having had some awareness and interest in the Otherworlds himself, his father had encouraged him to journal these experiences.  Some of these drawings are pictured below.

It’s rare that a child or young person is encouraged to explore these realities with such depth by a parent and for that reason, I feel the collection is rare and of great importance to helping us understand our nature of being as humans. I believe that these states of deeper perception with nature are innate within us and socialised out of us from a young age.

Our guest, now in his mid-twenties and undertaking a Master’s in biological science, was able to spend lockdown reunited with his father. This provided an opportunity to re-read the journals and attempt to categorise some of the beings and events that took place.

I would love to hear your thoughts on this beautiful share.

Martin Brofman’s Anything Can Be Healed is an excellent book for describing how to shift into other realities and see the world from alternative perspectives, notably healing the body, mind and anything that is not working for you, in your life. (Note: I trained with Martin from 2005 until 2014 and his healing system completely changed my life…I will get round to talking about this someday. Let me know if you’d like to hear about it!)

Mike Clelland’s The Messengers: Owls, Synchronicity and the UFO Abductee. I would recommend this to anyone interested in reading about people’s extraordinary experiences and how dreams often tie into encounters. I’m reading this at the moment and I find it fascinating. (Note: yes it does involve UFO encounters rather than fairies but there are many similarities and if you haven’t already explored these ideas, then this is an excellent start).

Patrick Harpur’s Daimonic Reality argues that the human psyche extends beyond the confines of the physical human body, and that it may in fact be a part of our reality. It’s a core text for understanding these encounters.

Dr Jack Hunter’s Greening The Paranormal is a collection of essays on humankind’s relationship with earth and what we have come to term as ‘extraordinary experience’.

Neil Rushton’s blog, ‘Dead But Dreaming‘ has a world of information about fairies, experiences and folklore. This particular article, Visioning the Fairies: Magical Ointments and Seeing the Unseen provides some excellent references to folklore in this regard, as touched upon in the podcast. 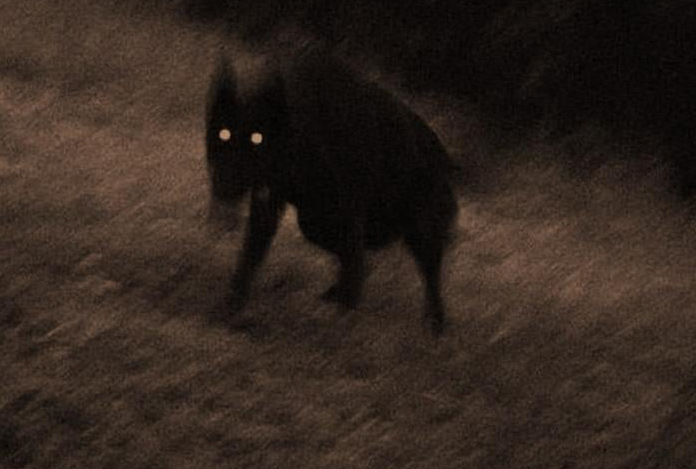 In this first episode of series two 🎉 I chat with a guest who encounters an Otherworldly creature that we are quite familiar with in folklore. His response to the experience is admirable and most interesting. It’s a great example of how faith, and spiritual connection (of any kind!) can aid us in our most challenging moments.

Black Dog sightings abound in folklore collections, and sightings continue to be reported, particularly in the UK but all over the world. Many of us are familiar with the image of the Hound of the Baskervilles, but these supernatural beasts appear in a great number of forms and are known by various names in the UK depending on the location: ‘Barguest’, ‘Black Shuck’, ‘Capelthwaite’, ‘Freyburg’, to name but a few.

Folklore author, Mark Norman’s book, Black Dog Folklore is an excellent study of the subject and features a multitude of sightings and traditions in the UK.

Here’s an interesting snippet. A letter from one mid-century Devonshire-based folklorist to another, about a trackway sighting:

“The Black Dog who guards the ancient trackway from West Quantoxhead towards Crowcombe was sighted rushing down the steep sides of the Deer Park one late autumn evening. It was seen by a motor-cyclist who could not make out what animal it was: ‘about the size of a large pig – and what puzzled me was its coat looked like ruffled feathers. It was black and something like a dog, it moved like one but I have never met anything like it before or since.’ This was an unusual extension of the Dog’s known patrol.” (Ruth L. Tongue in personal correspondence to Theo Brown, 19th September 1960) (Norman, 2015, pp. 37).

Simon Young’s ‘Fairy Census’ (2014-2017) also contains a number of references to contemporary black dog sightings. Here’s one from Britain that appears to be connected with a house and another from the US, which preceded the respondent’s own pet dog’s death:

§191) (Wales, Female; 1990s). ‘A friend and I were home one evening relaxing, my dog was out the front garden, it was late autumn, we had candles lit, listening to music, discussing spirituality/religion etc as was our passion at that time. We heard my dog a spaniel scratching the front door to come in, my friend went into the hall leaving the lounge door open to open the front door for the dog. I was sitting in my chair and could clearly see two metres or so out into the hall. I heard a commotion, like an animal’s feet running and looked out into the hall expecting to see Ben my spaniel come running into the room. I saw a man-sized ‘animal like’ creature run past and up the stairs, and heard the heavy sound of it running up on all fours, as it shot up the stairs. It was, I’d say, if standing, five foot five inches maybe more, it was sort of human crossed with an animal, I could see brownish leathery tough skin with coarse black hair sporadically growing out of its body, its head had a large flattened snout, crinkled and wrinkled like someone had forced its nose into its face, and upward protruding teeth. My friend heard it, but curiously did not see it. The dog had not come in and was still out in the garden. Over a period of a few years, I and visitors to the house would see red lights, like eyes, at night up on the landing and stairs and a few occasions hear the running up the stairs, like a very large dog. I am convinced it was a faery, a pooka, or some other thing. The house got renovated in later years and all occurrences stopped.’ ‘A large black dog, crossed with human characteristics and some other beast. Red eyes. Upward big fangs from bottom jaw. Flat large squashed in snout giving the face an ugly quite fierce expression.’ ‘Heard its running up the stairs on many occasions.’ ‘It was an old house, we held seances there, groups of friends into the paranormal would gather here over a few years, it was quite a hotspot of activity until its renovation.’ ‘It seemed like an elemental it seemed connected to the land the area the house. After renovation it stopped, it was definitely connected to the old untouched energy, before modernisation. We tried to use candles and hardly watched TV, preferring soft music at our groups of spiritual exploration there. There were a lot of experiences, by myself and others at that time.’

§273) (US (Illinois). Male; 1990s) ‘I distinctly remember this happening to me during January at 2:06 am when I was fifteen. I was lying in bed with the blinds closed and my bedroom door closed and locked. I had been asleep, but something prompted me to wake up immediately. I looked towards my bedroom door and saw a Black Dog with glowing green eyes and its tongue hanging out running from that side of my bedroom to the other side, near the foot of my bed. As the dog reached the foot of my bed, it disappeared into the shadows and never returned. I stayed awake for a few more minutes to record the time on my alarm clock and think about what happened. Then I went back to sleep. While the Black Dog was running, it made no noise whatsoever, not even the sound of its nails hitting the floor. I think it may have been running on the air rather than the actual floorboards. It didn’t seem to notice me despite my staring directly at it. I’m not sure how I could see its shape or its eyes glow when there were no lights on anywhere. How it got into and left my room is also a mystery. Its body shape was similar to my own dog at the time – labrador retriever with a slightly pointed nose and skinnier legs. To this day I’m not sure if it was a fairy dog or my dog’s doppelganger, since she died a couple months later.’