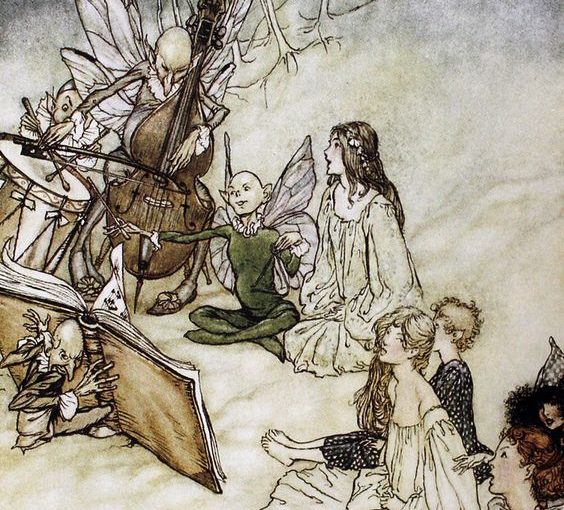 In this episode, my guest shares an experience which invoked a sense of indescribable longing. There are many stories in folklore of those who visited Fairyland never to return and those that did, often pined for Fairyland ever after (see ‘The Fairy Dwelling on Selena Moor’ on Episode 18 show notes). Some stories speak of a deep sense of yearning that draws folk to the precipice of no-return before something snaps them out of a trance. In many cases they are drawn in by a strange Otherworldly music and it was this form of enchantment that our guest experienced during lockdown last year.

There’s a bonus episode available on Patreon, where our guest shares another couple of strange occurrences and I offer her some advice in relation to her main experience of feeling enchanted.

In Evans-Wentz’s ethnographic collection of fairy encounters from the early twentieth century, a local man tells of a strange occurrence that took place while he was driving along the Ben Bulbin road. I find it particularly interesting that the informant describes the sound thus, “All sorts of music seemed to be playing...”. This seems similar to the way our Podcast guest likened the experience to being “at a festival and you hear music in the distance…being carried by echoes”. It was impossible for her to be able to recognise the type of music that she heard.

“…Michael said to his companion in the caret with us, William Barber, “You tell how you heard the music”’ and this followed: – “one dark night, about one o’clock myself and another young man were passing along the road up there round Ben Bulbin, when we heard the finest kind of music. All sorts of music seemed to be playing. We could see nothing at all, though we thought we heard voices like children’s. It was the music of the gentry we heard.”

§73) England (Lancashire). Male; 2000s; 21-30; in woodland; with several other people, some of whom shared my experience* [‘3 of us heard music’]; 9 pm-12 am; ten minutes to an hour; joyful; occasional supernatural experiences; no special state reported; unusually vivid memories of the experience. “Three friends in the woods late one night we all heard this funny music, the other two tried to dismiss it as some people playing fiddles or whatever it was in the woods at night! I am a musician and what I heard was not like any music I’ve come across before. I would say it was similar to traditional Irish music but really different, hard to describe.”

§117) England (Somerset). Female; 31-40; 2000s; inside a private house; on my own; 12 am-3 am; less than a minute; “I awoke from my sleep hearing music and remember thinking how unusual it was for the neighbours to play music at all let alone this late and loud enough for me to hear through the wall. Just then a ball of light floated in through the bedroom door and hovered right in front of me. I did all the usual eye rubbing in disbelief etc. It was still there so I said ‘who are you?’ The reply was ‘my name is Effeny and I am very yellow.’ This is all I remember of this one particular visitation.”

Enticed towards the Unknown

The following entry in Simon Young’s ‘Fairy Census’ 2014-2017 describes the sense of being “compelled” to the window and a “feeling of longing” to go outside and join the coloured lights:

§323) US (New Hampshire). Female; 2010s; 41-50; on or near water, in woodland, on a country road; on my own; 3 am-6 am; ten minutes to an hour; “I was staying at my parents’ home on a small island in New Hampshire (USA). I woke up at about 4 AM, and this was not notable because I have very irregular sleep patterns. What was different this time, was an inner ‘pull’ and ‘compulsion’ to raise the shade and look out the bathroom window. I hate having the shades up when it is dark outside – it is a strange picadillo – but I hate feeling like I am exposed to the outside world in a display case, I I looked out into the dark, and across the country road, a fair distance away there were multi colored lights varying in size, and they were dancing. They were making circles in the pitch black night, dancing high over the trees and low and they were beautiful and compelling, and mesmerizing. Still, there was something sinister that gave me pause, and I cannot explain this because there was nothing inherently frightening in their display. I started to feel compelled and drawn outdoors, a feeling of longing came over me and I wanted so badly to be close to the lights, and there was a feeling of almost apathy for my personal safety. The sun came up and the lights slowly dissipated and faded. On a side note, there is a strange belief on my mother’s Irish side of the family, that there is sidhe in our blood. I do not think this has any currency.”

As mentioned on the episode, there’s a story of collected tales in Lady Wilde and William Robert Wilde’s, Ancient Legends, Mystic Charms, and Superstitions of Ireland, Vol 1 (1887). We’re told that some people had a power of enchantment over others, known as the ‘Evil Eye’. One young man in Limerick around 1790 was said to have had, “this power in a singular and unusual degree“, which would cause him to be, “loved and followed by any girl (he) liked” We are told that, while travelling away from home he stops at a farmhouse and is refused entry by the farmer’s young daughter who is at home alone:

“The young poet fixed his eyes earnestly on her for some time in silence, then slowly turning round left the house, and walked towards a small grove of trees just opposite. There he stood for a few moments resting against a tree, and facing the house as if to take one last vengeful or admiring glance, then went on his way without once turning round.

The young girl had been watching him from the windows, and the moment he moved she passed out of the door like one in a dream, and followed him slowly, step by step, down the avenue. The maids grew alarmed, and called to her father, who ran out and shouted loudly for her to stop, but she never turned or seemed to heed. The young man, however, looked round, and seeing the whole family in pursuit quickened his pace, first glancing fixedly at the girl for a moment. Immediately she sprang towards him, and they were both almost out of sight, when one of the maids epsied a piece of paper tied to a branch of the tree where the poet had rested. From curiousity she took it down, and the moment the knot was untied, the farmer’s daughter suddenly stopped, became quite still, and when her father came up she allowed him to lead her back to the house without resistance. When questioned she said that she felt herself drawn by an invisible force to follow the young stranger wherever he might lead, and that she would have followed him through the world, for her life seemed to be bound up in his; she had no will to resist, and was conscious of nothing else but his presence. Suddenly, however, the spell was broken, and then she heard her father’s voice, and knew how strangely she had acted. At the same time the power of the young man over her vanished, and the impulse to follow him was no longer in her heart.”