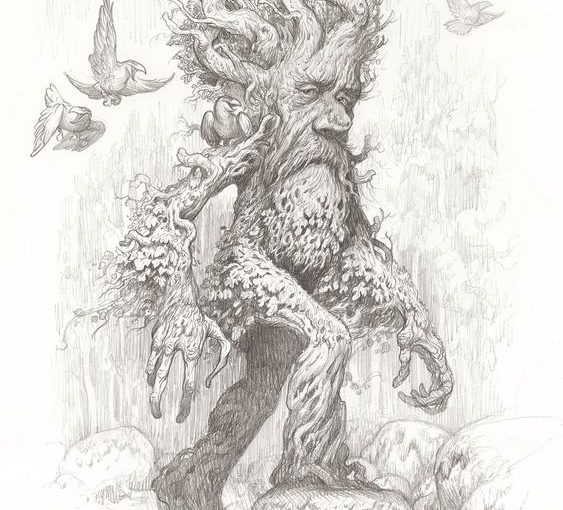 A multiple witness sighting of a walking tree trunk in the grounds of a university in Brazil, in around 1999/2000.

A Brazilian man and his companion simultaneously observed the tree trunk walking along the side of the road. They caught up with it after losing sight and felt certain he had changed into an old man with leathery lined skin “like the tree trunk“.

It’s a fascinating share. I describe my own sighting of one of these beings, which I also witnessed with two other people. A further example of these stick men/Ents/tree men is described in Episode 4: Mysterious Illuminations, which again, was a multiple witness sighting. From reported observation in all three instances, these beings appear to have a notably strange or comical gait when they move.

This interview is from the archives. I began interviewing people about their fairy encounters in 2016 when folklorist, Mark Norman and I were researching for our Devon chapter in Magical Folk: British and Irish Fairies: 500 AD to the Present.
In those days, I conducted interviews on Skype, took notes and audio-recorded on my phone. I have since contacted this man and he is happy for his story to be shared on the podcast.

Warning: These are not fairytales. The Modern Fairy Sightings Podcast is designed for viewers and listeners 16 years and older. This show is unsuitable for children or anyone who might be sensitive to creepy content.

This submission of a gnome appearing to change into a tree trunk, was made to The Fairy Society’s Fairy Census 2014 – 2017 collected by Dr Simon Young.

§18) England (Cornwall). Female; 1970s: I was on holiday in Cornwall with my family. I think I was about thirteen. We’d been on holiday in Cornwall before, and had joked about the ‘Little People’ who lived in the tin mines etc. I think we’d also bought souvenir Cornish Piskies in the past. The first proper day of our holiday we went for a walk on a clear sunny day. It was very rural; I remember we were walking down a grassy track with large banks of wild hedges running alongside. It could’ve been somewhere near Polperro. I am not sure. I was walking a few steps ahead of my mum and sisters, excited about having a whole week off, when I saw a gnome sitting by the side of the path. It was so unexpected; I think I remember feeling scared – or wondering if I was seeing things or going mad? I took another couple of steps and I saw his nut brown wizened face in detail. He was cheekily grinning at me. He had a mossy brown beard and dark brown shining eyes; he was wearing a peaked hat (brown) and a shiny jacket and trousers in shades of brown and ochre. I’d say he was about twelve- to fourteen-inches tall. I (literally) could not believe my eyes. I was even too amazed (dumbstruck is apt here) to turn around and tell my family to ‘look at the gnome’ by the path. Then the gnome cocked his head (again, cheekily), turned his back on me and kind of changed/melted (transmogrified??) into an old tree stump. This must’ve all happened in a second, just as I found the breath to say ‘Mum! Look…!’ But, of course, there was nothing to see but a tree stump. I felt really stupid then, so I ‘muttered something non-consequential as we walked past. I was almost panicking, trying to make sense of what I had just witnessed. I was quite shaken. It was a breathtaking experience. It seemed so silly, (and I felt so silly) that I didn’t tell anyone what I’d just seen. Yet I really believed I had witnessed a spirit of nature, or a gnome, or something… but I also felt stupid. Like a trick and been played on me, and I had fallen for it. I felt like the joke was on me and the gnome was having a laugh about it.’

This one is a similar description to our guest’s observation:

§39) England (Devon). Female; 2000s; aged 41-50 ‘Was sat on my stairs on the telephone looking out of the hall window that
looks across my front garden (no hedges), and onto the second main route into town. Time would be approximately 10.30 pm but visibility is good on the road as it is the secondary main route into the town centre. The road was quiet as it is a seaside town
and it was out of season. The road is well lit by streetlights. As I was talking on the telephone I watched a ‘tree-man’ walk slowly down the road. There were no hedges in my field of vision and I could clearly see any foliage that is across the road in the
gardens opposite as ‘he’ walked past them. This tree-man took so long (approximately up to two minutes) to pass I actually had time to mention it to my husband on the telephone and describe what I was seeing. The figure was approximately seven-foot tall, slim, I could clearly see a trunk like body from the waist up, branch-like arms and a quite haggard face with short branches coming from the top of the head and sides, but not like a true tree, they didn’t seem to taper to twigs. It walked in a measured way, as though putting one foot down and then making effort to pull forward, arms swinging. The figure was slightly leaning
forwards. It passed my field of vision and I stood up to look down the road, but next door’s hedge blocked my view. I did not feel it was threatening in any way, but it just seemed to be going about its business.’ 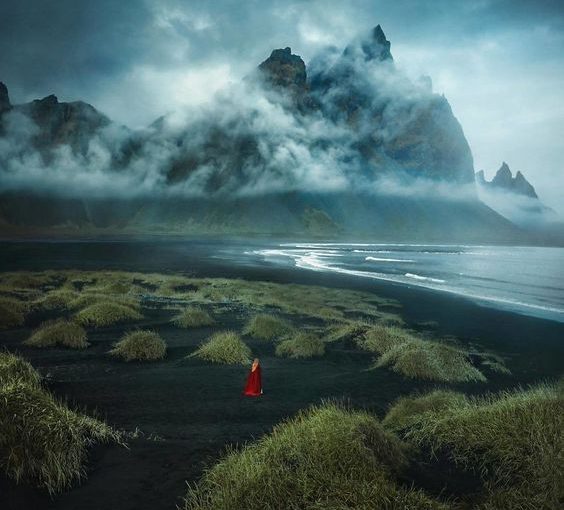 After suffering serious illness, our guest involved shamanic approaches in his quest to return to full health. During his successful process of recovery he discovered a deep resonance with chanting, which led to an extraordinary experience.

Later, on a trip to Iceland, he encountered a couple who showed up out of the blue and disappeared just as curiously. He has always felt, that they were not of this world.

In the Bonus Episode on Patreon, our guest describes a mysterious face which appeared in a fire.

A similar experience of ‘knowing’ to that which our guest describes. This submission was made to The Fairy Society’s Fairy Census 2014 – 2017 collected by Dr Simon Young.

§426) France (Ardèche). Male; 2010s; 61-70 ‘The beings that I saw appeared to be fell walkers. They wore walking gear. They had knapsacks. But their knapsacks seemed to be empty. They carried no bottles of water. There were about fifteen to twenty of them. I had just pushed my bike up a mountain and I was sitting on the grass at the top of it. They appeared, walking down from a path above me, and stood around me in a circle, chattering and laughing, ignoring me, as I sat in the centre of them. Behaving in a way, as a friend who lives in France commented, that no French person would. ‘The French would never do that.’ I chatted to three of the group, in broken French. First, a man who seemed to be their leader, the dominant male. Then a taciturn and sad looking man, and finally a woman. At that time I was on a spiritual quest that has been on-going for about twenty years. I felt that they were there to support me and to prove to me that my quest was not a fatuous one. One of them, the woman, came over to me and took from me a possession I carry that has tremendous spiritual significance for me. I was still sitting down. She stood over me. She had the strongest, most muscular legs I have ever seen – but in proportion. They were not grossly muscular. They looked like ordinary legs but I doubt that they were. They were the legs of someone who has walked everywhere, on every day of her life. This may seem preposterous, but I cannot stress enough the significance of her clearly not human legs. It was one of the things that truly made me realise I was with people who were not people. She took the possession I carry that has ‘tremendous spiritual significance’, said its name and then kissed it. At which point, as if their mission was over, the group turned and walked away. After they had gone I came back to ‘this reality’, realising that I had been Outside of Time, a state that I have experienced before, always while undergoing unusual and significant events of a spiritual nature. When the group left me they were chattering and laughing. I heard them doing so as they turned a corner and left my sight. Scarcely less than ten seconds after they had gone, and realising that something truly strange had occurred, I got up and followed them. I turned the same corner. There was no sight of them. They had vanished., 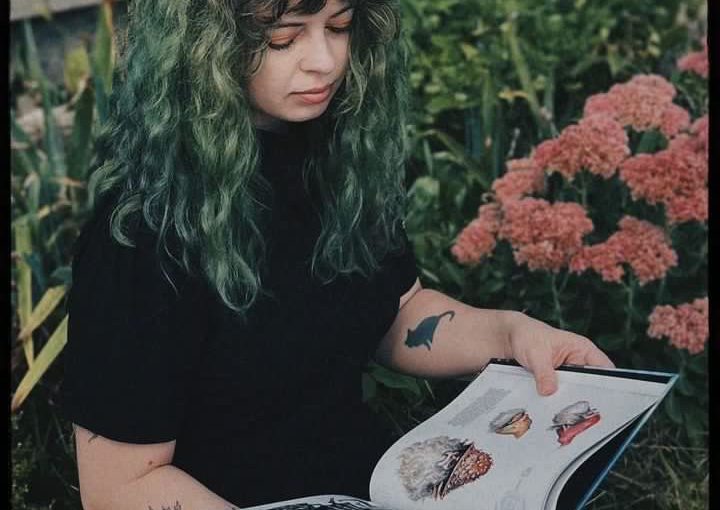 A beautiful in-depth chat with Brett Manning – a well known and much admired artist of the strange. Her new book, One Foot in the Green presents insightful and characterful interpretations of the Fae and cryptid beings.

Brett’s sense of the Otherworld is inspired by her own dreams and personal experiences.  This chat is a really generous and open hearted discussion about her relationship with these beings and their realms.

Connect with Brett’s work on Instagram at BrettManningArt and BrettisaGirl on Etsy.

Hop over to the Patreon BONUS EPISODE to hear excerpts from Brett’s book, One Foot in the Green.

Content warning: These are not fairytales and the content is unsuitable for children. Some episodes may contain details which some may find unsettling or frightening. The Modern Fairy Sightings Podcast is designed for listeners 16 years and older.

Please do subscribe, rate and share this episode and support the podcast by joining Patreon if you can. Thank you