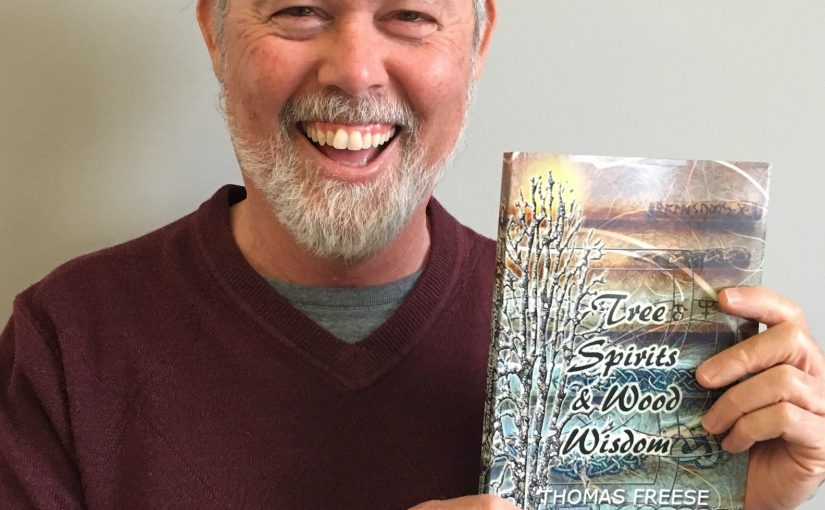 In this episode I speak to a fellow researcher, Thomas Freese. Thomas is also an author, a storyteller and an artist. To date, he’s written 11 books and 200 articles. Much of his research is focused on people’s extraordinary encounters with ghosts, nature spirits, angels, fairies, and multidimensional beings.

In his storytelling role, Thomas visits schools and finds that children often want to tell him about their own strange experiences.  We discuss this and some of the many Otherworldly encounters that he has collected over the years.

In a bonus episode for The Curious Crew on Patreon, Thomas describes his own fairy experiences. He also shares some unnerving encounters with paranormal creatures known as ‘black-eyed children’. These beings are known for appearing at people’s homes or vehicles and asking to be let inside.

Thomas tells us about a woman’s childhood memory of venturing into fairyland via an enchanted tree door, where she is invited to stay for a meal. Throughout folklore we are warned against eating fairy food…for if you do, you may never return from fairyland. Here’s a great article from Morgan Daimler on the subject.

‘The Fairy Dwelling on Selena Moor’ is a well known folktale, various versions of which were collected by Katharine Briggs and Lady Wilde:

“When Mr. Noy, a local farmer, loses his way and wanders into a fairy realm, he finds that he is very thirsty and asks for a drink. But he is signalled by a young maiden dressed in white whom he recognises as a former sweetheart, thought to have died some three or four years earlier. Though she carries ale, she denies him a drink and warns him against eating a fruit or plucking a flower if he wished ever to reach his home again. “Eating a tempting plum in this enchanted orchard was my undoing,” she warns him. The fruit that enslaved her dissolved into “bitter water” in her mouth. Like all else in fairyland, fairy food is a snare and delusion: “What appear like ruddy apples and other delicious fruit are only sloes, hoggins [haws] and blackberries.” Mr. Noy did escape, but, we are told, like other visitors to Fairyland, he pined and lost his thirst for normal life after his adventure.” – The Fairy Dwelling on Selena Moor

In Episode 10: Stay or Go we heard of an encounter which took place in a house – to be specific, a little boy’s bedroom. Some might be surprised to learn that fairies turn up in houses as well as nature locations. The show notes on Episode 10 include further examples of house brownies, including Colin Parson’s example which I referred to on this episode with Thomas Freese.

Here is ‘ The Silkie of Denton Hall’, collected by Katharine Briggs:

“You must beware of offending your brownie or he may turn into a boggart, and then woe betide you! I heard of such a case the other day. It was told me by a friend rather older than myself who passed her girlhood in Northumberland. When she was still a girl-this would be in the nineties of the last century-her mother used to take her to call on some old ladies who lived at Denton Hall near Newcastle. These old ladies would often tell them of the silkie they had in the house. The silkie is the Northumbrian brownie. The old ladies were very fond of their silkie. It is true that she made it rather difficult to keep servants, but if they were in a strait whe would do all sorts of kind things to help them, particularly cleaning grates and laying fires ready to light. They often said that they did not know how they would manage without her. There was something too about flowers, the details of which my informant does not quite remember. She thinks it was that the silkie left little bunches of flowers for them on the staircase. She dressed in grey silk, and they often met her, or were aware of her, on the stairs. My friend left the place and the old ladies died. In the last war, however, she returned to Northumberland and found Denton Hall owned by another family of her acquaintance. They were not, she says, the kind of people to get on with fairies. At any rate they did not see the silkie, but the son of the house was so persecuted by intolerable bangings in his room that they did not stay in the place for long. It is plain that the brownie had become a boggart.”

In this episode, I mentioned Howard Hughes’ Podcast Unexplained which is excellent. The Beasts of Britain, episode with author Andrew McGrath features multiple sightings of huge supernatural dogs, in the UK and further afield…

…and if you’re interested in protective dog/wolf spirits then check out Episode 14: Guardian of the Mountain of this podcast which is pretty mind blowing!

In the podcast I mention my own sighting of a stick/tree man. It’s rather similar to the description in Episode 4: Mysterious Illuminations given by a man in the UK. I’ve also spoken with a man in Brazil who saw a tree man – again in the company of another person who saw it too. I think it’s interesting that all the stick man encounters I’ve heard about so far, appear to be multiple-witness sightings.

Have you seen one of these? Get in touch if so. I’d love to hear more about these beings. They seem to be particularly eccentric – even for fairies!