Delighted that the book Mark Norman and I contributed to, has been published to rave reviews and is available from Amazon or by contacting me directly. 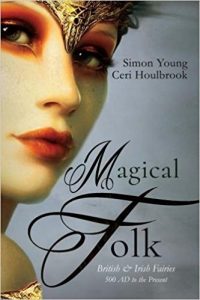 Magical Folk: British and Irish Fairies 500AD to the Present, is a collection of fairylore and fairy sightings from around Britain and Ireland.  Our Devon chapter offering features two modern sightings and the fantastic response to our research largely gave birth to my ongoing project, Modern Fairy Sightings.

Much of our research took place at The Museum of Witchcraft and Magic library and many of our interviews and material will be released in due course.

Here are references and links to some of the reviews:

YORKSHIRE POST ‘The Fairy hoax that enchanted the world a century ago.’ 14 Feb

MAIL ON SUNDAY review ‘Away with the fairies’ 31 Dec

GLASGOW HERALD review ‘A big insight into the lives of little people.’ 23 Dec

THE SUN  ‘Away with the fairies’ book feature 6 Dec

dailymail.co.uk/news/article-5156475/Fairies-them.html ‘Fairies and where to find them’ book feature  6 Dec